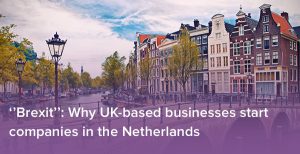 In the wake of the Brexit referendum, entrepreneurs are taking steps to safeguard their businesses.

Although Article 50 has not been invoked yet, many entrepreneurs are already planning how to secure the future of their business.

Many United Kingdom based businesses have to cope with the economic uncertainties after the outcome of the Brexit referendum; to separate from the European Union. There is no saying whether the Brexit will be beneficial or highly unfavorable for UK-based companies.

Entrepreneurs are now choosing for stability and security by incorporating a Netherlands-based company or subsidiary.

Why should you consider moving to the Netherlands?

Even though most of the population voted ‘’out’’, there are many international UK-based businesses that are ultimately unhappy with the decision. Many corporations, from trading companies to large financial institutions have considered the opportunity to move their business to the Netherlands or are in process of doing so. The decision to establish a business in the Netherlands could turn out to be essential.

As the Netherlands is located in close proximity to London. It seems like a practical and efficient move to relocate your company to the Netherlands. The Netherlands is considered a stable location in terms of its position in Western Europe and its accessibility to the Eurozone, both in economic and logistical terms.

Foreign companies are able to open a branch or a subsidiary in the Netherlands and test the traits of the market by forming a virtual representative office for their company. 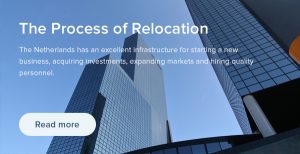 Moving to the Netherlands in light of the Brexit vote can ultimately improve and change your business and life, providing more stability and security for your business.

Intercompany Solutions is a Netherlands-based incorporating firm specializing in setting up companies in both the EU and Middle east. See also https://lawyersinnetherlands.com