Entrepreneurs toss and turn with indecisiveness

The defining factor in the complex decision-making process of entrepreneurs is still human emotion – not the technological or analytical methods. How can indecisiveness be avoided?

How can it be that entrepreneurs, who are considered by nature to be resolute and decisive, regularly lose sleep over business related problems? Is this endless tossing and turning warranted or is this more a case of the self created illusion of seemingly insurmountable difficulties?

Before attempting to answer these questions, it might make sense to take a look at the kind of problems an entrepreneur is confronted with.

The entrepreneur is constantly under pressure to create both tangible and intangible assets for the shareholders of a company. Clients want optimal products or service; employees search for security and appreciation, investors an adequate compensation for their risk and so forth.

As long as a company shows continual linear growth, related problems are typically straightforward and obvious. Perhaps the entrepreneur cannot see the next 10 steps to be taken in front of him, but he knows in any case which first step he has to take.

Since companies don’t always exhibit such systematic linear growth, but frequently in fluctuating spurts or even a step backwards, the entrepreneur is regularly confronted with more complex problems. Decisions taken can have far-reaching consequences. 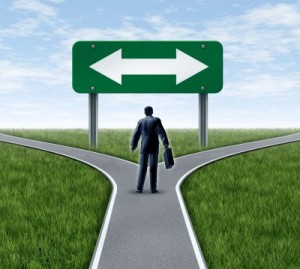 For the entrepreneur, problems often arise which place him at a crossroad. He then has to make a choice between 2 mutually exclusive alternatives. Consolidation or expansion, cooperation or not, etc.

Of course, there are various diagnostic tools and analytical methods available to help him decide. Take for example the rational 6 step model or the Vroom-Jago model. He can also look for help outside or depend on his intuition. 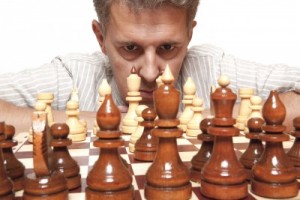 In reality, it’s not uncommon that an in-depth analysis actually feeds the doubt. Every projection for the future becomes increasingly complex. It’s like a game of chess, where calculation of all the potential scenarios is next to impossible.

The further one tries to look into the future, the mistier it gets. It becomes impossible to pick a “winner”. The more aware of this the entrepreneur is, the greater the pressure placed on his decision. Ultimately, this “hypothesizing” can paralyze him. In spite of this, the entrepreneur must make a decision, otherwise external factors will decide for him.

Is there a way out of this dilemma?

The immobilized entrepreneur has only one thing left to do. He must cut himself loose from this drastic method of forecasting and go with his feelings. He must ask himself what the choice for one alternative over the other means to him right now. Does it feel right or not?

Often what’s revealed is that the crossroad was nothing more than a self created delusion. A diversion of sorts has been created so that the next step, which was clear from the start, won’t have to be taken. The entrepreneur doesn’t feel ready to take on the next logical challenge, so creating an imaginary crossroad delays it.

This buys him time to overcome the resistance to the next step. He can safely bask a little longer in the comfort of the illusion of free will. Making a choice would in fact, mean the loss of the alternative!

Not technology in combination with rational methods, but human emotion is therefore still the defining factor in the complex decision-making process!

The unfortunate entrepreneur doesn’t always have it easy. Situations are constantly arising which make high demands on his decision-making ability: