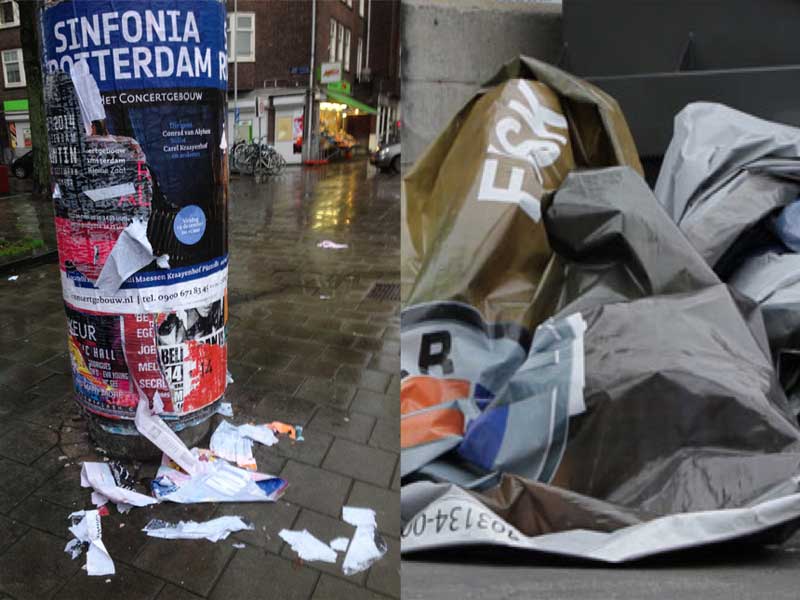 Each week in Western Europe, outdoor advertising consumes 3 million square meters of paper. A year’s worth of these outdoor ads equals a one meter wide piece of paper that would wrap around the planet 3.9 times. This doesn’t even include billboards printed on vinyl using aggressive solvent-based inks or the new plastic pvc films being used in place of paper because the new LEDs don’t push enough light through the paper to make them look colourful and bright.

The printed paper is so saturated with inks that it cannot be recycled, so it either ends up in a landfill or incinerated. An ad’s average life cycle? Only 12 days.

It’s clear from these numbers that outdoor advertising has an enormous negative impact on our environment. For companies serving the triple bottom line, this presents a unique problem: when it comes to promoting our sustainable businesses we are not using a sustainable form of communication. This does not qualify as greenwashing but it is not practicing what we preach and that can be confusing to our customers. 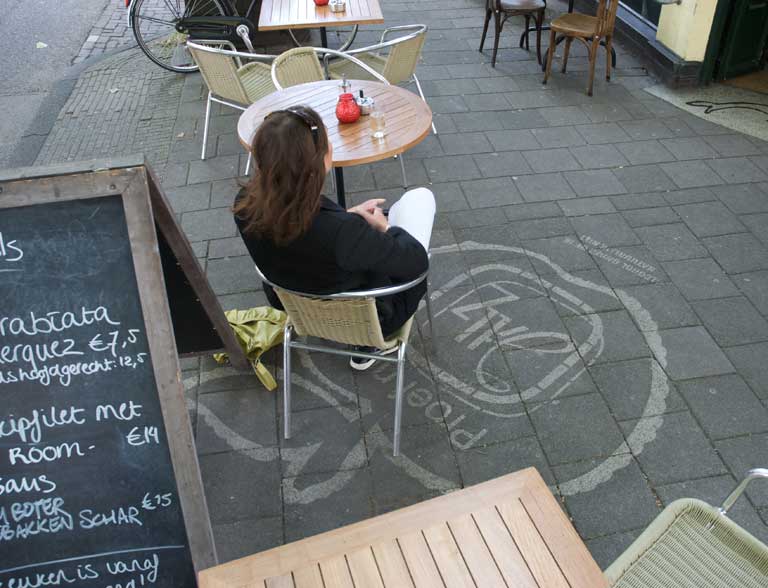 Luckily, mother nature is a fantastic brush and our urban landscape is the perfect canvas. There is a young, forward thinking new industry that is developing innovative and sustainable outdoor media techniques collectively known as natural-media that makes it possible for responsible businesses to communicate in ways that get attention and demonstrate their authentic commitment to their values.

Natural-media is not perfect. It is not 100% eco-friendly. No business activity can be 100% eco-friendly. Still, it’s not hard to understand that water, sand, moss, mud, chalk, milk paint and the like are less harmful mediums and they generate very little waste.

Natural-media techniques are not really new at all. Most have been used for decades even centuries. What is new is how they are being used. In the coming weeks, I’ll introduce you to some of the techniques I like best. I think it’s fitting to start the discuss with the most popular technique and the one that started it all: reverse graffiti.

Reverse Graffiti — What is It?

Reverse graffiti, also known as clean advertising or green graffiti, is a form of street art and if you’ve ever written “Wash Me!” on a dirty car, you’ve already used it as a form of communication. The method uses clean water, a template made from recycled materials and a power-washer to literally clean messages out of the dirt. It requires no ink, no paper, no vinyl and no electricity to front or backlight the messages so it generates very little waste.

Water is precious and using it to create ads may seem a like a huge waste, but in truth a reverse graffiti message uses around 10% of the amount of water used to produce a piece of paper comparable in size. Even better, many of the companies using this technique are funding water projects in regions where clean drinking water is scarce.

Its minimal use of resources makes using reverse graffiti a natural and authentic way to live your values and capture attention. Furthermore, documenting the story of your project is a great way to capture content that can reach a much wider audience and continue to generate attention for years to come when it makes its way to the internet.

Here are three great examples of reverse graffiti campaigns where advertisers understood that potential and made the most of it.

Green Works
When Green Works wanted to drive awareness about their new line of cleaning products, they turned to one of the fathers of the modern reverse graffiti movement – Paul “Moose” Curtis. Together, they created a mural on the wall of the Broadway tunnel in San Francisco. The mural itself was stunning, and capturing its creation in this beautifully directed video, has so far resulted in over 1.5 million views!

Green Works also took photos that have been featured on thousands of web pages and are still being shared six years later. Ultimately, a campaign that cost less than $50,000 has generated millions of dollars of exposure. 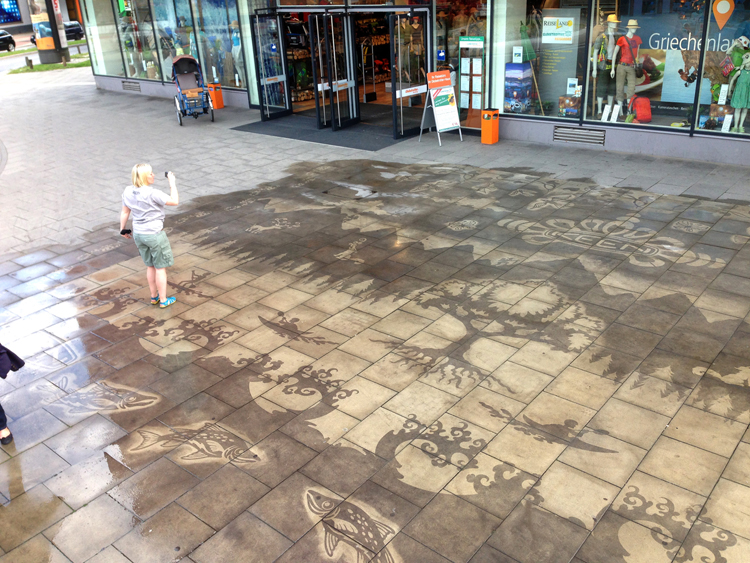 KEEN Footwear
Nol Gerritse, head of marketing for KEEN Europe, worked with GreenGraffiti® to produce a 130 square meter sidewalk mural in front of two GlobeTrotter stores n Germany. They also captured the execution on video and took tons of photos during the four hours it took to produce the sidewalk mural. Hundreds of passersby stopped to watch as the artwork emerged from the dirt, taking their own photos and videos to share on social media. The local and national press also picked up the story, exponentially expanding the reach of KEEN’s campaign. An investment of less than 20,000 euros resulted in what KEEN called their “best outdoor promotional campaign of 2013.” 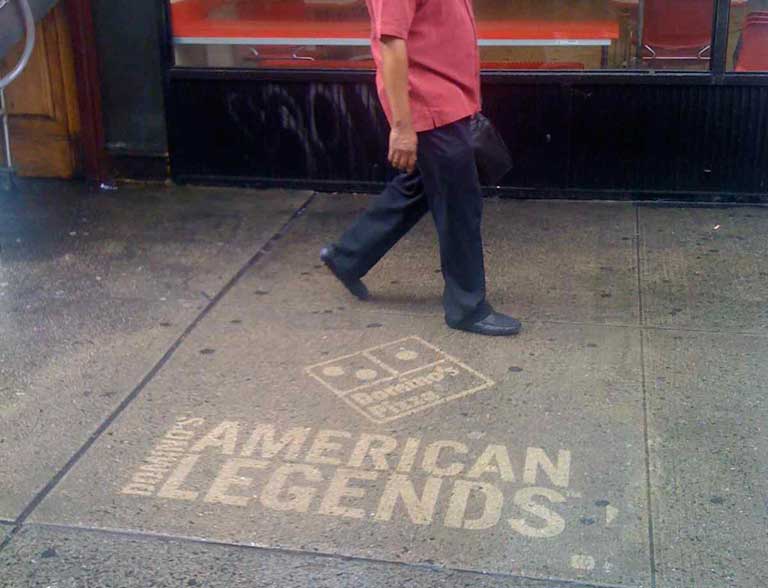 Dominos Pizza is not known for being a sustainable company, but that didn’t stop them from using reverse graffiti to produce a small campaign consisting of 70 images in four US cities. What made this campaign so successful was the clever idea of creating a treasure hunt. Dominos Pizza invited people to find the ads, take a selfie and upload them to the internet for the chance to win a slice of pizza. Imagine people going out to find, photograph and post an image of an ad! Combined with a little PR push to get the ball rolling, the reverse graffiti campaign produced 25 million online impressions in the first 3 months.

The Secrets to Success

Not every reverse graffiti campaign gets these results, but those that do use a similar formula. They:

At the end of the day, fascination with the novelty of the outreach and shared sustainable values led consumers to act as brand ambassadors and share these messages. We all know that peer to peer advertising is the ultimate form of advertising.

Reverse graffiti is easy to do and very affordable. In the Netherlands there are now 15 companies who will execute your campaign for you. Or for a few hundred euro, a company can produce a template, rent some equipment and create its own campaigns. Before you go rent a power washer though, there are a few things you should consider.

When you use the public space as your advertising canvas, you are monetizing something that belongs to everyone. Municipalities are still grappling with what to do when this happens. Though cities in the Netherlands are the largest client group by far, they still do not legally permit natural-media companies to do this for businesses. To the best of my knowledge, noone has ever gotten into serious trouble as the messages are simply cleaned away.

Natural-media is a new idea that’s bumping up against old rules the classic sign of innovation. Although there’s no reason that local governments shouldn’t embrace it and earn from it, many have proved slow to do so and at this rate, it will take years before they decide if it will be allowed and how it will be regulated. This is in contrast to France where it is being allowed and the French are getting a lot of credit for an innovation that came from the Netherlands. Because of this uncertainty, it takes courage to join the ranks of those running reverse graffiti campaigns.

As scary as bending the rules can be, getting in trouble can add great value to your campaign. I’ve had clients that were disappointed they didn’t get into trouble. I’ve also had others who thanked me when they did and their story appeared on the front page of the local newspaper or all over social media. If things really get contentious, it’s easy to allay concerns – just quickly clean the messages away.

Once cities begin to see the potential of reverse graffiti, they can transform their dirty public spaces into an untapped public asset worth millions of euro a year. They would not only generate revenue – they would create green, low-skilled jobs and take another step toward achieving their own sustainability goals. You can see my TedX talk about this here.  Idealistic but certainly doable.

Defining the rules of engagement will require that our cities invest some time and energy but it won’t require an investment in infrastructure – just stroll down a city street and you’ll see that dirt is everywhere. Even better, the dirty urban canvas is self-healing and will become dirty again without any effort so it can be leveraged over and over. When compensating for the water becomes part of the rules of engagement, just imagine the amount of clean drinking water we can provide for those in need.

Based on the examples above, it’s clear that outdoor advertising can be produced without having such a negative impact on our environment. By adopting natural media techniques, you can demonstrate your commitment to your values and grab attention for your message.

In the coming weeks, I’ll explore some other natural media techniques so check back if you want to learn about working with materials like sand, chalk and moss. If you have questions about reverse graffiti, feel free to reach out for advice.

Jim is an advertising professional specializing in "natural media" a collection of techniques that use natural materials to produce communication messages the are highly targetable, offer great creative flexibility and have a high return on advertisement investment.

Jim founded GreenGraffiti in 2008 and worked with many international brands SMEs, NGOs and municipalities producing over 650 campaigns in 17 countries.

In 2015 Jim founded Natural Media Experts a consulting firm that makes it easier for advertisers to produce highly successful natural media campaigns that continue to add brand value long after the campaign is over.

He enjoys public speaking and creating awareness about the benefits of innovative and sustainable media techniques, how they can be used to engage the audience and how they are great content creation moments.

Jim has been invited to speak at TEDx Warwick and appeared as an expert juror on the reality challenge show Street Art Throw Down. Jim is recognised as an industry spokesman and leading authority on natural media.

He takes a pragmatic approach to sustainability and understands the limitations in business. He is a firm believer that every step forward is a step in the right direction. Recognizing that companies can not change over night but they can benefit from the small steps they take and by remaining humble.