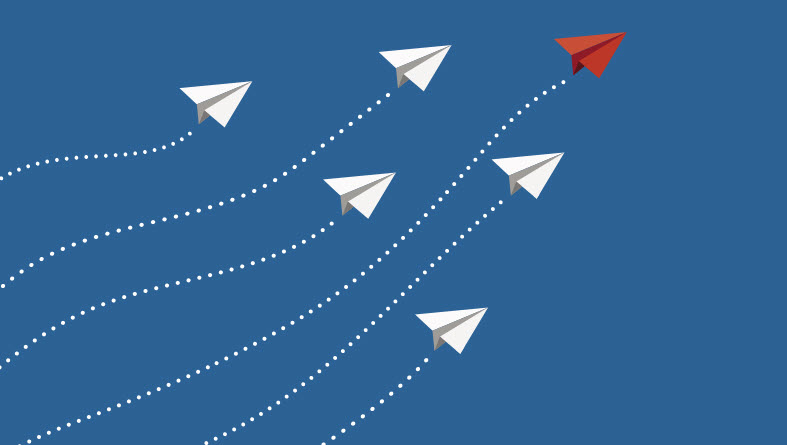 It is well known that the culture of an organization has the power to drive sustained business performance, especially in times of (disruptive) changes. At its best, culture unifies people and creates shared behaviours, beliefs, values and assumptions that lead to success. Ignoring the need for a culture that aligns with the strategy, can become a limiting force and undermine the strategic success of an organization.

Culture is created, evolved, managed, manipulated and influenced by human intervention. Through leadership, responsibility can be taken of the culture, which makes it unique. In practice, this is achieved by the following:

Organization culture and its three levels

The definition of culture used in this paper is inspired by the thoughts of Edgar Schein (Organizational culture and Leadership from Edgar H. Schein), who focuses his definition on the process of how a culture is learned and evolves:

“The culture of a group can be defined as the accumulated shared learning of that group as it solves its problems of external adaptation and internal integration. This accumulated learning is a pattern or system of beliefs, values and behavioural norms that come to be taken for granted as basic assumptions.”

In this definition, culture is defined as a product of shared learning (Accumulated shared learning). It proposes that in order to understand the culture of the organization one needs to know what learning has taken place under which circumstances (historical perspective). When this knowledge is shared in an organisation it easily becomes a pattern of belief and value that gives meaning to the daily activities.

Basic taken-for-granted assumptions: the shared knowledge provides meaning, stability and becomes the cultural DNA of an organization. These assumptions become the source for the way things are done within the company culture.

As a leader it is important to realise how the organisational culture can be observed and analysed. Organizational culture may be analysed at several different levels. In this case, the term ‘level’ is used to refer to the degree to which the cultural phenomenon is visible. These levels range from those elements you can see and feel to the deeply embedded, unconscious, basic assumptions. The three major levels of culture are shown in the figure below.

Espoused beliefs and values: remain conscious and are explicitly articulated because they serve the normative or moral function of guiding members of the organization as to how to deal with certain key situations as well as in training of new members how to behave. Such beliefs and values often become embodied in an organizational philosophy, which serves as a guide on how to deal with uncertainty in uncontrollable or difficult events.

Basic underlying assumptions: In this definition, these are the values and beliefs that have become so embedded in the culture that little variation is found within a social unit. This degree of consensus results from repeated success in implementing certain beliefs and values, as previously described. Culture at this level provides its members with a basic sense of
identity and defines the values that provide self-esteem.

In summary, the degree of alignment between the three levels define the force of the culture. The alignment with the strategy decides the contribution of culture to the success of an organisation.

The essentials of Leadership

The definition used to define leadership in this paper is:

Notice key elements of this definition:

From this definition we will explore the following roles of a leader:

Selecting the right culture and leadership for every strategic approach

Once an organisation has identified the right strategic approach, it needs to understand which organisational culture and leadership are required to successfully execute this strategy. A study from the Henderson institute (Your strategy process needs a strategy, a BCG Henderson Institute study, 2018) has shown which traits in the culture correlate with success in each type of strategic approach. In order to develop this culture, a leadership style has been chosen that serves this culture best. In the following chapters we will take a deep dive in each of these leadership styles by looking at the four roles of a leader: lead by example, create vision, execute strategy and unleash potential.

In table 1 you find an overview of the strategic approach with the connected Organizational culture and Leadership. 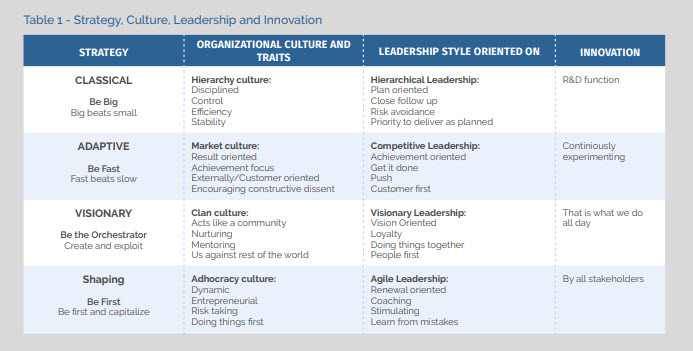